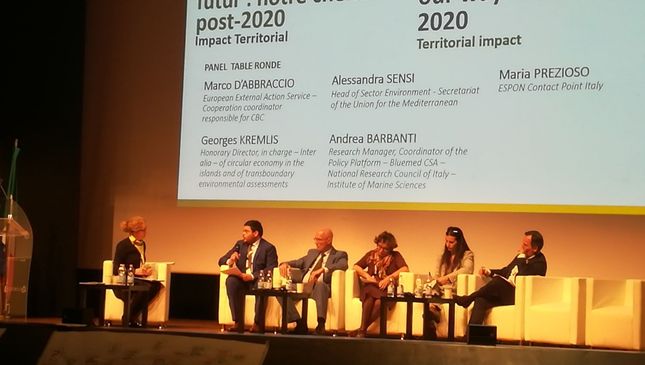 Many representatives from the CO-EVOLVE project took part in the “MADE in MED – Crafting the future Mediterranean” event organised by the Interreg MED Programme in Rome, Italy, on 18-19 April 2018.

This major event, which celebrated reaching the mid-term of the Programme for the 2014-2020 period, gathered around 800 people, including local, regional and national public authorities, universities, research entities, private entities and interest groups, among others. These included representatives from the Programme’s 91 projects, decision-makers, experts, policy promoters and the media, among others.

Several partners of the project, i.e. The Region of East Macedonia and Thrace, The Emilia-Romagna Region, CNR-ISMAR, the CPMR-IMC, the Valenciaport Foundation and PAP/RAC, took part in the event to represent CO-EVOLVE and explore synergies with other projects of interest, in particular MITOMED+, Consume-Less and BLUEMED.

The main outcomes of all the projects were presented during the sessions on day one. The dynamics revolved around three specific comprehensive themes going beyond the thematic communities i.e. climate change, blue economy and inclusive growth. Several topics in line with CO-EVOLVE’s activities were addressed during the sessions i.e. reduction of waste production in coastal areas, reduction of resources consumption, sustainability indicators of coastal and maritime tourism, and the ‘Green Beach model’ applicable to various Mediterranean contexts.

Projects also took part in the design and execution of the “Tasting and Testing MED” exhibition area, available during the whole event, where the public could see and sometimes experience what the projects are producing. CO-EVOLVE also had its own concept illustrating the project’s main outcomes (see picture below). 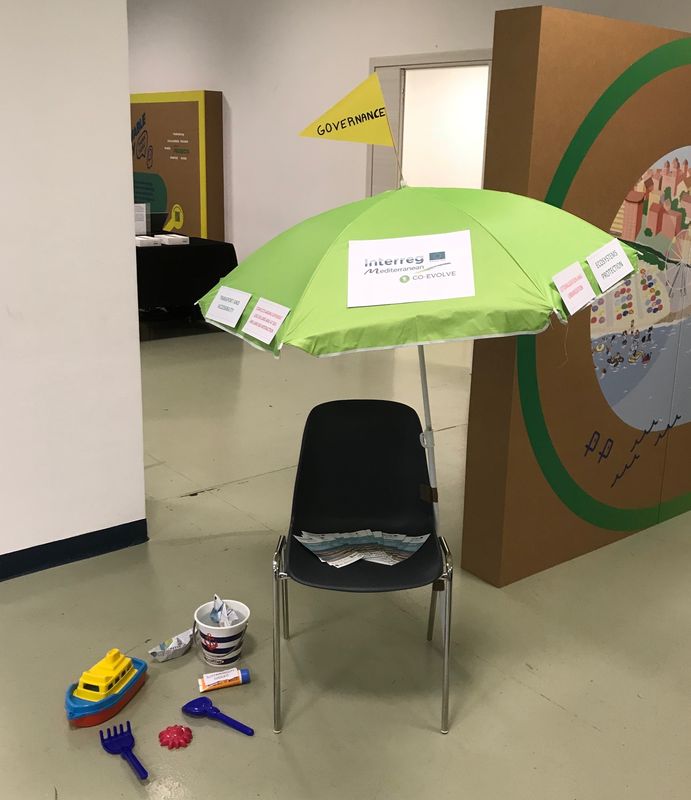 The second day’s sessions moved the focus to the capitalisation of Interreg MED projects, offering the opportunity for discussions with other programmes and initiatives, and a reflection on the future of territorial cooperation in the Mediterranean.

These included a debate between several programmes from the Mediterranean area -including Interreg ADRION, Interreg Balkan-Mediterranean, Interreg SUDOE, Interreg Europe and ENI CBC MED- on the possible synergies and what they can learn from each other.

A session dedicated to the Interreg MED PANORAMED project on governance outlined the crucial role of the project in promoting multilevel dialogue as well as ensuring that all Interreg MED projects built on relevant past and current experiences and knowledge, and that their results be capitalised on.

Following this, key EU actors, including EU institutions, Regions, national authorities and the Union for the Mediterranean (UfM), were invited to debate on the future of territorial cooperation in the Mediterranean.

Panellists stressed the positive impact of territorial cooperation and its role towards addressing key EU challenges.

All presentations are available here.

The recording of all sessions is available on the Programme’s YouTube channel.